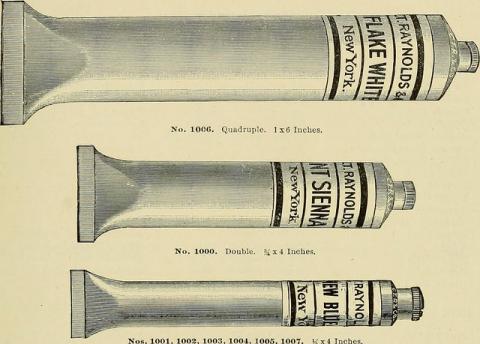 To artists making their own paint, the only concern would have been the quality of the paint, but to those in business to make a profit selling paint, the temptation to add less expensive ingredients to keep production costs down was very strong. It is known that many adulterants and fillers were added to paints sold ready-made by artists' color men, and this undoubtedly affected the brushing qualities of the paints in question. The need for mediums to improve the consistency of the paints seems to have grown from this. In modern times, manufacturers add aluminum stearate, a soap, to mitigate the tendency for oil and pigment to separate in the tubes as the paints sit on store shelves or in artists' paint boxes. Aluminum stearate changes the oil from a fluid to a more colloidal consistency, and changes the way the paint handles. However, some manufacturers exercise greater restraint in the use of such substances than others, and artists have choices. With this in mind, the painter of today can get by with less medium simply by choosing less stiff paints to begin with, or by grinding his or her own, as was done in the days of Rembrandt and earlier. There are a number of quality paints currently on the market that exhibit a fluid consistency as they come from the tube, and require little or nothing to be added to them in order to be controllable. Should they require a bit more softening, a drop of linseed or walnut oil may be all that is needed.

From a structural standpoint, the strongest paint layer is one with the optimum ratio of binder to pigment. The best commercially available oil paints are already very close to this ratio. Adding too much of any medium is likely to produce weak spots in the resulting paint film for lack of sufficient solid matter, just as a wall made with poorly fitting stones and too much mortar will be weaker than one in which the stones fit more closely together and a minimum of mortar is used.

Natural resins were long thought to impart desirable properties to oil paint films, but this belief may well be in error, at least as far as permanence is concerned, as each introduces its defects into the paints to which it is added. Discoloring and embrittlement over time are chief among these defects, which are well documented in art conservation circles.The prevailing opinion there, based on the best information to date, is that the paintings composed of simple combinations of linseed oil and pigment are more durable and less problematic over the centuries than those containing significant amounts of any of the natural resins. The works of Rembrandt and others seem to bear this out. Of course, in the world of science, there is always the possibility that new information will come to light that will warrant the revising of opinions. Research is ongoing.